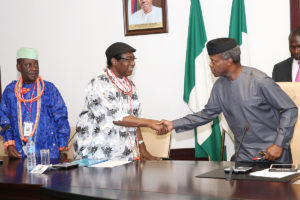 PRESS RELEASE
By Laolu Akande, Senior Special Assistant to the President on Media & Publicity, Office of the Vice President
*We will engage on basis of trust-VP
*Meets Gbaramatu leaders & US investors on proposed project
As implementation efforts on President Muhammadu Buhari’s New Vision for oil-producing communities in the Niger Delta region progress, states in the region are beginning to indicate interest in working with the Federal Government and the Private Sector to develop the Modular Refinery concept as a panacea to illegal refineries in the region.
This is one of the highlights of the inter-ministerial meeting on the Niger Delta presided over earlier today by Vice President Yemi Osinbajo, SAN.
Under the plan that is being developed, communities would come together working with their respective State Governments, the Federal Government and Private Sector operators to work out a template for the establishment of modular refineries in the communities.
Already at another meeting today at the Presidency, a delegation of representatives from the Gbaramatu Kingdom also met with the Vice President. The representatives came with a group of US investors.
“We are saying there is a way out of violent agitation, but it is by creating opportunities and the environment where the people in the communities can benefit,” Prof. Osinbajo said at the inter-ministerial meeting which is the second such meeting in the past few weeks working out how best to establish the modular refineries.
According to him, “we will engage them on the basis of trust, we must prove to them that we are trust-worthy.”
At the inter-ministerial meeting attended by the Deputy Governor of Delta State, Barrister Kingsley Otuoro; Minister of Niger Delta Affairs, Pastor Usani Uhuru; Petroleum Resources Minister of State, Dr Ibe Kachikwu; Environment Minister of State; Mallam Ibrahim Usman Jibril, other issues including developments on the planning for the Maritime University, update on contractors in the Niger Delta region returning to site and Amnesty issues among others were also discussed.
The MD of NDDC, Mr Nsima Ekere; the DG of NIMASA, Mr Dakuku Peterside; and the head of the Amnesty Office, Brig.-Gen. Paul Boroh (rtd), were also in attendance.
Later the Vice President held a meeting with representatives of the Gbaramatu Kingdom and investors, under the aegis of the “Oil and Gas Producing Trust Fund,” including prospective investors in a Modular Refinery project in the community.
At the meeting, the Vice President noted that the modular refineries to be established will have to be profitable and realistic in order to address critical issues bothering on the development of the region on a sustainable basis.
He added that the Federal Government is committed to addressing challenges in the Niger Delta in a comprehensive manner.
According to him, “there are several things that we are working on now on the modular refineries and what government’s own participation is all about.
He continued: “We are also trying to work out a template for implementing this decision on modular refineries.
“But we must also structure this in a way that works for business or structure it in a way that is realistic and works, otherwise it would not last…it is a business proposition first and foremost, it must make sense.”
He said the Buhari administration is committed to ensuring that “we look at how we deal with the issues concerning the Niger Delta as enshrined in our new vision for the region.
“It is a long term commitment that is why we are looking at projects that will benefit the people of the region and the country at large,” he added.
The Vice President commended the Gbaramatu community for taking the initiative to support government’s actualization of a plan for the region, stating that “it should be one of the models of what we will be doing in the future.’’
Earlier, the leader of the delegation and Bolowei of Gbaramatu Kingdom, Chief Wellington Okrika, said the community was committed to the actualization of the 20, 000 barrels per day, Gbaramatu Modular Refinery project which he noted would bring about lasting peace and stability in the region.
Chief Okrika thanked the Buhari presidency for the Vice President’s visit to the Kingdom, which according to him has brought peace to the community.
Photos by Novo Isioro.

Jitters as AIDS funding is withdrawn