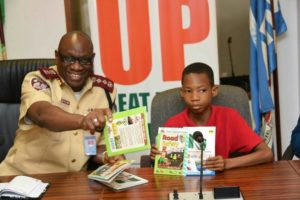 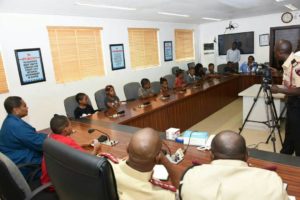 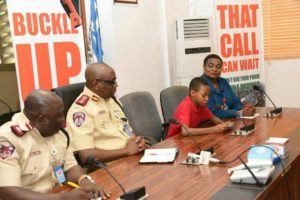 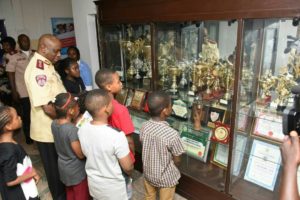 Road safety boss and corps-marshal of the Federal Road Safety Commission (FRSC), Boboye Oyeyemi, got more than he bargained for when a visiting delegation of children led by a television producer, Ms Comfort Okoronkwo, threw a barrage of questions at him.
The questions include how other road users should behave around a school gate or with school buses around.
Expectedly, their children-centered questions drew answers adults must note, else they get fined or end up in jail.
After Boboye, the children are billed to visit the Chief of Army Staff, General Buratai, with questions on security; First Lady, Aisha Buhari; and Senate President, Dr. Bukola Saraki, among others.
The Corps Marshal said that there was certainly speed limits around school areas, and advised that drivers should be careful within such areas and when a school bus stops to pick or drop children.
He said it was an offence to drive while carrying a child, that it was child endangerment, adding that if caught, such persons will be prosecuted within the law.
Boboye disclosed that the right place for a child to sit in a car is at the back and, and for babies, strapped properly. Moreover, he said children under 12 are expected to sit at the back seat of cars.
Enamoured by the interview, Boboye adopted one of the children and promised to sponsor a five-minute segment on Safety Tips to sensitise the public on a television programme.