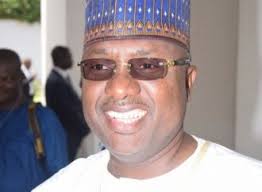 directed the State Ministry of Justice to initiate legal actions  against contractors who allegedly absconded with N4.8 billion Millenium Development Goals (MDG) funds in the state during the tenure of former Governor, Murtala  Nyako.
Bindow, who few weeks ago, re-named Murtala Nyako’s road after President Muhammadu Buhari gave the directive while receiving the investigative panel report on the implementation of MDG contracts under Nyako administration.
The governor last year constituted  the committee to investigate the implementation of MDG contracts under the administration of his former political godfather (Nyako), a development many perceived as an attempt to get at the former governor.
Bindow said that his administration thrives on transparency and accountability, adding  that the misuse of state resources would not be condoned.
According to him the era of shortchanging the people of the state was  gone adding that his government was committed to clearing the rot in the system.
The governor, who referred the reports to the State Attorney  and Commissioner of Justice, Mr. Bala Sanga, directed him to take necessary legal actions.
While submitting the report Alhaji Alfa Bellel, the chairman of the committee told the governor that the MDG office refused to provide payment vouchers between 2007 and 2009.
He  stated that the office provided the committee with payment vouchers from 2010 to date.
Bellel pointed out that N11 billion was received by the MDG within the time under review, noting that some projects were not executed.
He alleged that out of 1591 contracts awarded  only 300 were fully paid, while  some of the contracts were fully paid without contract sites.
The chairman said that the committee also uncovered huge sums as un-remitted tax within the period under review.
He said that the committee had toured all the 21 local government areas in the state to access the sites of the alleged projects.