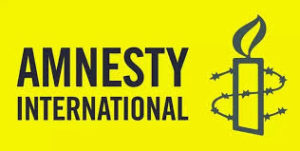 By Sam Kaye in Maiduguri
Theatre Commander Operation Lafia Dole, Major General Lucky Irabor has lambasted the Amnesty International (AI) for infringing on the territorial integrity of Nigeria by deliberately maligning the military with negative reports.
The General who briefed newsmen Wednesday warned that Nigeria cannot as a sovereign nation continue to bow to the whims and caprices of groups like AI which do not wish nation well.
AI’s latest reports stated that 240 people including infants died in a dreaded military detention centre in Borno in 2016 while 177 pro-Biafran agitators were extra-judicially killed same year.
“At the military detention facility at Giwa barracks, Maiduguri, cells were overcrowded. Diseases, dehydration and starvation was rife. At least, 240 detainees died during the year. Bodies were secretly buried in Maiduguri’s cemetery by the Borno State Environmental Protection Agency staff. Among the dead were, at least, 29 children and babies, aged between newborn and five years.”
But Irabor posited that his troops were well balanced in their conduct considering the contemporary modules for the rules of engagement in the field of warfare adding that there was no need to bring down the morale of the soldiers with such negative reports even as they try to fight insurgency.
“Their malicious  attack on the military  has become a way of destroying the institution.  And to destroy the institution means destroying the country. They and their allies are angry that we did not react to their last report meant to destroy our common institution.
“We are aware some Nigerians are used in this lingering provocation, which is why we must rise against this subtle role of Amnesty International to neo-colonise us.
“I want the general public to be wary of these damning reports as a vindictive move by the Amnesty International because they made a report which was not looked at and they feel they should continue hitting us.
“Their acts are meant to completely sabotage and  weaken the Nigerian state and we will not allow that to happen. We cannot allow people to destroy us when we are making progress with keeping the peace” said Irabor.
On the allegation of two hundred and fourty suspected Boko Haram members  dying in detention, the General said that it was just a figment of their imagination adding that even the Red cross can bear witness to whatever was going on in the place because they are constantly looking into their places of confinement.
To consolidate the peace, the General called on Nigerians to remain vigilante by ensuring that they supply information to the relevant authorities as and when due.
According to Irabor, his troops attached to Gajiram were ambushed during the period under review leading to the death of an officer and ten soldiers and loss of one gun truck to the insurgents.
Irabor regretted that the use of drugs had become rampant in the theatre adding that people should ensure that they are vigilant instead of behaving as if there is nothing happening in this area.
He said that his troops shot and killed two  terrorists which resulted in an abandoned vehicle with a massive haul of assorted hard drugs and Audio messages meant to be used by the terrorists.
The discovery of Indian hemp allied to Boko Haram, is also related to criminal gangs operating in the theatre said the General.
“We found a fake identify card on a fellow who claimed to be a police man coupled with loads of Indian hemp found in the vehicle.”
A total of 914 males 2,388 females, 2,158 male kids and 2, 483 female kids were arrested within the period under review
Among the arrested suspects during the period under review, were twelve foreigners from Chad and Niger.

Update: Gbadamosi released as CBN reacts to credit to him for improvement in Naira value