Army fingers residents in attack on Magumeri, near Maiduguri 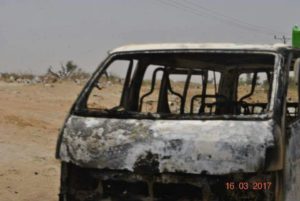 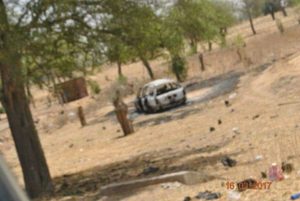 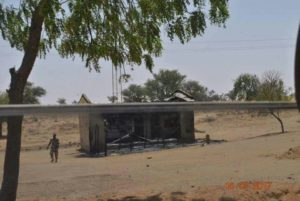 Boko Haram insurgents Wednesday unleashed mayhem on Magumeri town torching buildings and vehicles along their path. A soldier was killed, another seriously injured, while an armoured tank was burnt.
But the Army is saying in a statement Thursday that residents are hand in glove with the terrorists.
Magumeri, is the closest town and Local Government Area after Maiduguri and before Gubio and Damasak.
State Deputy Governor, Alhaji Usman Durkwa, visited  Thursday with government and security officials. He was received by the Commander of the Army Brigade, Col. Dan Gana and police Divisional Officer, Mohammed Usman. He also went into a closed-door meeting with the army chief.
There were other reports that the terrorists targeted only the Army and Police facilities. The DPO’s car was burnt.
Residents of the town fled to Maiduguri, the state capital after escaping from the attackers.
Curiously, in Abuja, Army spokesman, Brigadier-General Sani Kukasheka Usman, issued a damning statement pointing accusing fingers on residents of Magumeri.
His statement reads: “Please recall that suspected Boko Haram terrorists attempted to unleash mayhem on Magumeri town, Magumeri Local Government Area, Borno State yesterday (Wednesday) evening. The timely intervention of the military thwarted the attack. While troops are still consolidating and mopping up, it is imperative to state that preliminary investigation shows that the attackers of Magumeri came from the same community. The terrorists that attacked the village are well known to the people. It should also be noted that the village was never attacked throughout the period of the insurgency for some inexplicable reasons.  The terrorists and their collaborators hibernating in the area were never exposed. There seems to be unholy alliance between the terrorists and the villagers.
Consequently, we are constrained to state that it’s now high time for the people to take up the fight themselves and help the Nigerian military  and other security agencies to protect them. It is a grievous mistake and criminal offence to continue to shield or harbour any known Boko Haram terrorist in their midst. The terrorists must be exposed and their movements promptly reported to the security agencies. The terrorists are inhuman and barbaric, therefore cannot be trusted to spare anyone in perpetuating their  inhuman acts.
“It is imperative that all communities in the North East especially Borno State, should fully cooperate with the military and the Security agencies by exposing Boko Haram terrorists in their respective towns and villages.”
It was gathered that a few weeks ago, Nganzai along Maiduguri-Baga road was also attacked leading to the death of many and the carting away of food items provided by UN agencies and international non-governmental organisations (NGOs) operating in the area. “The terrorists were reported by eyewitnesses to have cautioned civilians to be calm and go about their activities in the area,” a source said.
An observer has pointed out that “the proximity of these attacks along Maiduguri/Damboa road, Maiduguri/Gamboru/Ngala road, Maiduguri/Gubio road, Maiduguri/Baga road and sundry places puts the centrally located city under a siege of sorts.”