The Managing Director of the Nigerian Ports Authority (NPA) has vehemently denied she doled out $25,000 dollars each to select All Progressives Congress (APC) chieftains to get an endorsement for her former boss and friend, Governor Nasir el Rufai of Kaduna State, to be named Vice President to Professor Yemi Osinbajo, should President Muhammadu Buhari be unable to continue in office.
Speculations of northern politicians scheming to lay on the levers of power in the presidency, as a prelude to 2019 has been rife.
Fearing a backlash from the ports authority helmswoman, one of the online publications that carried the story has apologised profusely 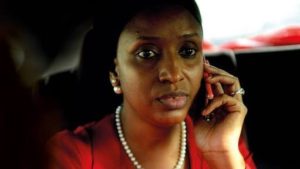 to her for the publication.
Tuesday, the NPA boss exonerated herself and hinted at corrupt elements she had taken as being behind her travails. She also threatened to sue the writers.
Her statement titled  RE: The Presidency has ordered for an investigation into the financial books of the Nigerian Ports Authority under the management of Mrs Hadiza Bala Usman for fraud, reads in full:
“My attention has been drawn to malicious lies being bandied around by a Prince Henry Nwazuruahu on my person. I wish to CHALLENGE him to bring up evidence on any such meeting with any APC Chieftain and any monies being given.
“I wish to challenge him to provide the authorship to this report whom I shall file a suit against in the court of law for defamation of character
“In the last few days, I have faced a barrage of false malicious lies against my person in the media and I know the sponsors of this. I will not budge on my position on compliance to Federal Government of Nigeria policies and I will not bow on my stance to rid the NPA of corrupt practices.
“I will not be cowed or intimidated into conforming to corrupt practices of cheating the Federal government of its revenues.
“I have been issued with death threats and veiled messages conveying that my life is at risk because of the stance I have taken.
“No false media attacks or threats to my life will stand in the way of my doing the right thing.
“Finally, we have not received any such notification by the presidency of an investigation into our financial books; and indeed we are open to any of such investigation as we have nothing to hide.”
The story on Breaking PostNG, among others, which has gained traction in the social media that led to strong rebuttal activist turned technocrat reads:
“The Presidency has ordered for an investigation into the financial books of the Nigerian Ports Authority under the management of Mrs Hadiza Bala Usman for fraud.
Mrs Hadiza Bala Usman, the MD of The Nigerian Ports Authority who once served as Governor El Rufai’s Chief of Staff is alleged to have given $25 thousand to several APC chieftains to support El Rufai’s emergence as Vice President under the assumption that President Buhari may not return to Nigeria from his medical leave.
Buhari’s medical leave which lasted for more than 45 days instead of the planned 10 days raised a lot of questions about the President’s ability to return to office. While there were rumours that he was in coma after a series of operations, there were even rumours of his passing and a conspiracy by the Presidency to conceal his health status from Nigerians as much as they could.
Governor El Rufai and his former Chief of Staff had seen the President’s ill health as an opportunity to further push the Former’s Political Career. Mrs Hadiza Bala Usman who was appointed by President Buhari, met with several APC chieftains at the request of El Rufai and reportedly gave $25,000 each to many of them to influence the picking of El Rufai as the Vice President should President Buhari fail to return to Nigeria and Vice President Yemi Osinbajo was sworn in as President.
This grand plan would see El Rufai contest for the 2019 Presidency as it would be widely accepted in the APC Northern Nigeria that the north had not completed its 8 year tenure.
President Buhari’s return marked the end of El Rufai’s scheming and dashed his hopes, the Kaduna Governor wrote a lengthy letter and released a lengthy memo to criticise the President’s policies weeks after the President returned.”