The Many Photos of Abuja House, London

The other Abuja in London
Almost three weeks since he left for London, with its attendant spin, vile rumours, and frenzy in the social media, President Muhammadu Buhar, continues to receive guests, some out of love, others out of curiousity, many summoned, but others for loyalty sake.
The photos have not stopped the rumours, the lies from propagandists, including government spokesmen, who insist Buhari is well, even when the photos tell obvious tales.
Many who ought to be praying for the President have weighed in on the controversy with criticisms, while many continue plot to benefit from the emerging scenario.
For now, Professor Yemi Osinbajo continues to do the job, but the return of the Katsina-born former major-general remains a mystery. At least, for now. 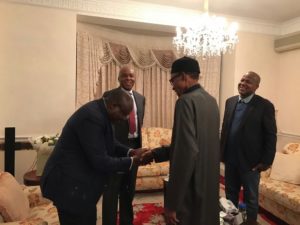 “Are they still alive?” a Chibok father’s desperate Valentine question to BBoG