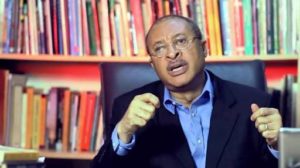 Former Central Bank Governor, Prof. Charles Soludu, economist and teacher, Prof. Pat Utomi, and Dr. Udenta Udenta are part of a Pan Igbo group, Nzuko Umunna, calling on the government to release detained Ipob leader, Nnamdi Kanu, and, swiping at the APC- led administration for failing to deliver on promises to Nigerians.
They also told journalists in Abuja Tuesday that the government should learn to obey court orders.
Said Soludo who spoke for the group: “There seems to be a national consensus that the current system cannot endure. We are in a state of emergency at all levels. The national council of states has to be convened urgently.
“We demand for the urgent release of Nnamdi Kanu and his colleagues as well as all prisoners of conscience”, they said.
”We visited Nnamdi Kanu to hear his own point of view as well as share our own point of view with him.
“We believe that Nigeria has the potential to be great, and like most countries has its own challenges.
“Nigeria has never been more divided than now. Most discerning patriots have come to the conclusion that Nigeria as currently structured is destined to be a failed state‎.
“It is our considered view that most of the agitation is in response to a looting elite. We do not condone violence.
“We note that in 2015 Nigerians voted for change. As the ruling party, the APC has it duty to deliver to the Nigerian people.
“So far APC seems to have abandoned its cardinal duty to Nigeria.”

Osinbajo does nothing apart from Buhari, says aide