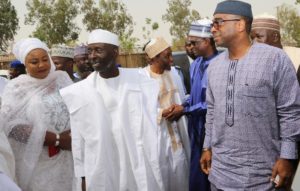 FG establishes agencies to aid export promotion -Awolowo
By Remi Adebayo, in Kaduna.
In a bid to boost export trade and foreign earnings, the Federal Government has directed the Nigerian Investment Promotion Commission and the Presidential Enabling Business Environment Council, PEBEC, to work with the existing export agencies.
Director General of the Nigeria Export Promotion Council, NEPC, Mr Olusegun Awolowo, made the disclosure at the opening of the 38th edition of Kaduna International Trade Fair in the state capital.
The NEPC boss who represented the Ministry of Industry, Trade and Investment said the addition of the new agencies was a pragmatic effort to tackle constraints experienced by Micro, Small and Medium Enterprises (MSMEs) and ease bottlenecks around exports.
“This is a pragmatic effort to tackle constraints experienced by MSMES. The Federal Ministry of Industry, Trade and Investment has also put in place a steering committee to develop a roadmap and policy for the implementation of the MSMEs policy framework,” Awolowo said.
He said the new agencies are expected to promote ease of doing business in Nigeria, remove all encumbrances to trade facilitation by ensuring simplicity and streamlining export and import documentation.
“With these in place, we hope to achieve a reduction in the cost of doing business in Nigeria.
“Other areas of reforms will include improved efficiency in business registration, entry process including visa reforms, land reform registrations, contract agreements amidst other benefits,” he said.
Speaking earlier on the theme “Promoting  Private Public Partnership as Panacea for Accelerated Growth and Development”, Chief Bassey Edem, the national president of National Association of Chambers of Commerce, Industry, Mines and Agriculture, commended KADCCIMA for the Public Private partnership (PPP) initiative in the State considering the current situation of the Nigerian economy.
Bassey said PPP holds the key as a viable funding model and solution to the economic challenges confronting the nation.
“While lauding the government’s attempt to stimulate economic activity by investing heavily in infrastructure, promoting ease of doing business and exploring export alternatives to crude oil, the volatility of the global crude oil market places a heavy strain on government revenues to be able to fund these initiatives.”
He advocated the promotion of the PPP initiative to help replace old infrastructure, provide new technology and open up multiple opportunities to realise new incomes for government.
In his goodwill address, Governor Nasir El-Rufai who was represented by his deputy, Arch. Barnabas Bala Bantex gave kudos to the Chamber for representing the spirit of Kaduna to reenergise its economy.
He admitted that it was obvious that government cannot match the private sector in job creation, therefore there was need for partnership with private sector to promote aggressive economic reforms through various initiatives embraced by the state.
While welcoming participants and exhibitors to the fair, President of Kaduna Chamber of Commerce, Industry, Mines and Agriculture, KADCCIMA, Dr. Muheeba Dankaka expressed gratitude to the federal government for its support by diversifying the economy.
She said the present administration has encouraged economic diversification with emphasis on solid minerals and agriculture, believing it would go a long way in reducing over-dependence on oil as Nigeria’s major revenue earner.
She called on government to keep its obligations to the business community and reduce its footprint in economic activities to enable markets to operate efficiency according to prevailing market forces.
Highlights of the opening were the cultural dance, acrobatic displays and traditional music. Also, the NEPC chief, Awolowo presented the Kaduna Deputy Governor, Arch. Bantex and Dr. Dankaka with packaged export-ready local products.