Dogara thanks colleagues for his success 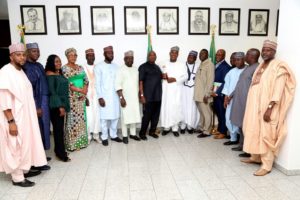 Press Release.
Thank you for supporting my leadership, Dogara Tells Reps
..says leaders must be selfless
Speaker of the House of Representatives, Hon Yakubu Dogara, has admonished  leaders at all levels to work to protect the collective interests of their subjects in order to build their confidence.
He said this on Wednesday when he received the plaque awarded to him by The Sun newspaper as its Political Icon of the Year from Chief Whip of the House of Representatives, Hon. Alhassan Ado Doguwa, who represented him at the award ceremony in Lagos last Saturday.
“For me, I believe that leadership is not a zero sum game. If any of us is doing well, it should reflect on all of us. If one of us suffers, all of us should bear some kind of brunt resulting from that suffering”, he said.
Dogara also showered enconiums on all members of the House for their solidarity and support to his leadership.
Expressing appreciation for their support, he said, “I can say that from the leadership to the entire membership of the House of Representatives, you have never let me down, you have never let any of our leaders down….and this is instructive…….it shows what we can achieve if we work together.
“Together we can achieve more, it means that what, as individuals, we may not be able to achieve, working in a collegiate environment or working together as representatives of the people, we’ll be able to achieve. So I want to thank you, most especially for members who sacrificed time, sacrificed their resources, personal resources without any kind of funding whatsoever to be in Lagos to identify with me, and I guess the entire world was shown the kind of solidarity that we have in the National Assembly.”
Speaking earlier, Hon. Doguwa informed the Speaker that no fewer than 100 members of the House attended the award ceremony on his behalf.
He also commended Dogara for providing leadership and uniting the House, acts which he said motivated members to throng to Lagos in show of solidarity and loyalty to the leadership.
“We also have to make it clear that you should continue to count on us wherever, because what happened in Lagos was a manifestation of clear cut support and solidarity for you by members of the House of Representatives.”

Again, US promises to share intelligence with Nigeria on Boko Haram, but analysts scoff