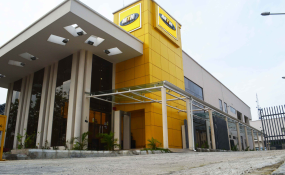 Nigeria’s Senate Tuesday threw its hat into the ring, condemning the xenophobic attacks on Nigerians and others in South Africa, warning that the government may reconsider its relations with South Africa if the government there does not put a stop to such attacks.
The Senate position comes as South African mobile telecommunications company, MTN, re-opened its customer services outlets across Abuja Monday. They were shut after last Thursday’s attacks and looting at the Maitama District office
The lawmakers also recalled the December 2016 strangulation of a Nigerian by the South African policemen.
Many Nigerians were robbed, business premises looted and torched, while a pastor was viciously stabbed in last week’s attacks on Nigerians…
The Senate resolved to, among others, “invite the Minister of Foreign Affairs to provide insight into the federal government plans towards engaging the South African government to effectively end the xenophobic attacks that just resurfaced and the growing incidence of extra-judicial killings of Nigerians.”
“Urge the federal Government to reconsider Nigeria’s diplomatic ties with South Africa if the ugly incidents of xenophobic attacks and killings of Nigerians in South Africa are not urgently halted by the South African Government; and;
“lead a delegation of Nigerian Legislators to the South African parliament to address the ugly trend.”
At the weekend, presidential aide on Foreign Affairs and Diaspora, Abike Dabiri-Erewa, one of the first government officials to take exception to the xenophobic attacks, lashed out at South Africa’s Home Affairs Minister Mr. Malusi Gigaba’s statement that the attacks on Nigerians “were better discussed at the diplomatic levels” when more than 100 Nigerian lives have been lost in South Africa.
She said further: “It appears that Mr. Gigaba would rather dwell on and entertain himself with diplomatic niceties when the welfare of Nigerians resident in South Africa are at stake now more than any time in recent history. His response to the xenophobic attacks, which has now become a recurring decimal on Africans, most especially Nigerians living peacefully in their host country of South Africa was indeed unfortunate.
“While it’s no longer news that law-abiding Nigerians in that country have borne the major brunt of these attacks, the news by the Home Affairs Minister that his country is trying to get rid of criminals in his country at the time when indiscriminate mayhem and looting of law-abiding Nigerians is very suspicious, to say the least.
“Even if this unguarded statement must be taken in its face value, we wonder if wanton destruction and indiscriminate killing of their African brothers is the most sensible excuse to give. The home affairs minister should have been more guarded and introspective in his statements so as not to further fan the embers of xenophobia that may get out control if care is not taken.
“Nigeria and South Africa have a long-standing diplomatic relationship in which the former played a critical, if not a pivotal role that culminated in ending apartheid, among so many of her positive interventions. Indiscriminate killings, in which 116 deaths have been recorded of her people MUST not be how Nigeria should be paid back.
“Xenophobia is such a debilitating social disease, based mostly on ignorance, in which its carrier also suffers. I therefore suggest that the home affairs minister should engage in the mass education of the South African people about the debilitating effects of this disease with immediate effect.
“It’s apt to mention at this juncture that the home affairs minister only met with African consulates forum, an association of African consuls general, based in South Africa recently , despite the fact that this meeting was long overdue. Mr. Gigaba’s response to the mayhem that a segment of the South African people perpetrated on law-abiding Nigerians in South Africa smirks of insensitivity, and it’s therefore very reprehensible, if not unacceptable. In view of this unfortunate statement, I am therefore restating my earlier call on the African Union (AU) to take up the South Africa’s xenophobic issue as a matter of urgency.
“The days that the Nigerian government will fold its arms while its citizens are maltreated to the point that some of them have lost their lives for no just cause are long gone.”