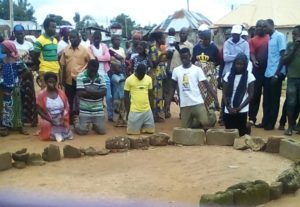 The Assakio Mosque in Lafia, Nasarawa State, where a cross was sighted glowing on the ground near the central Muslim praying centre continues to draw throngs of pilgrims 12 days after. even as some Catholic priests have set up a worship base to hold mass (see photo).
Other residents are doing brisk business selling oil, crucifixes, holy water, and other religious objects.
An everyday.ng correspondent who visited Assakio witnessed continual influx of people from within and outside the state.
Speaking to the people of the area which was ravaged by intra communal crises in 2014, Nasarawa State Commissioner of Police, Abubakar Bello, charged them to see the strange appearance as a sign for the people of the area to live in peace with one another.
The Nasarawa Police boss who also paid visits to the paramount ruler of the community, Osula Inarigu, affirmed that the appearance “should not be subject of controversy,” stating that he had deployed men of the police force to the area to forestall possible breakdown of law and order.
A community leader in Assakio, the Makungujin Assakio, Sabo Atoshi was quoted as saying, “we see the appearance of the cross as a sign from God for our people to live in harmony with one another. We are one people irrespective of religion and God has shown us why we must live together.”
Many respondents disclosed that they have been awe-stricken by the strange appearance. Laraba Shehu, a resident of the area and a mother of three boys said, “we were the first persons to see this cross because we live close to the mosque.”
“The light begun to show on the ground three days ago (Friday, 30th September) and many people gathered to see it. By the next day the light became brighter and the news begun to spread like wild fire. I don’t think Assakio would remain the same again after this appearance,” she said.
Others interpreted the phenomenon to mean that God is showing the path of salvation to the people of the area and beyond.
Said Daniel Ogwu: “If anyone had any doubt as to the way of salvation or to meet God, he has answered the most asked question on earth. It is the cross where Jesus Christ died for all.”
The Chief Imam of the Mosque, Muhammad Ilyasu told journalists that the appearance of the cross within the premises of his mosque as “an act of God Almighty.”
“I have said that Jesus is also a prophet of God, and God can say anything to be and it will be so. We do not think this is a problem even though it is strange,” the religious leader said.
On enquiry about the perception of Muslim faithfuls to the incident, the Iman disclosed that “adequate provisions” have been made to avert any clash. He said it was agreed with Christian faithfuls that they would make way for the Muslims to observe the five mandatory prayers stipulated by the Qur’an.