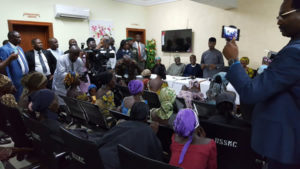 Some looked so pathetically thin, others wore distant and empty looks, while one had a baby on her thighs, as many looked worn out and tired. Peace and joy, even that of being freed were lacking on their faces.
After 913 days in the captivity of notorious Islamic insurgent group, Boko Haram, 21 students of the Government Secondary School in the mostly Christian town of Chibok were yesterday freed. Government is saying no ransom was paid and there was no swap of Boko Haram prisoners or detainees for the girls.
No one really believes government, but French news agency, Agence France Presse (AFP) has said four insurgents in government custody were swapped for the girls in Banki town in the same Borno State where the girls, who were sitting for their final secondary school examinations were snatched. 197 girls are still being held.
Oby Ezekwesili’s Bring Back Our Girls (BBOG) has applauded the government action asking it to increase efforts in getting the other abductees home.
Vice President Yemi Osinbajo, ministers and other top government officials met with the young ladies at the Department of Statd Security (DSS) Headquarters in Abuja Thursday.
Officials of state gushed out confirmation of the release of the girls. First was presidential spokesman, Garba Shehu.
He wrote in the morning: “It is confirmed that 21 of the missing Chibok Girls have been released and are in the custody of the Department of State Services, DSS. The Director-General of the DSS, Malam Lawal Daura has just briefed President Muhammadu Buhari on the matter.
“The release of the girls, in a limited number, is the outcome of negotiations between the administration and Boko Haram, brokered by the International Red Cross and the Swiss government. The negotiations will continue.
Then came Minister of Information and Culture, Alhaji Lai Mohammed. He told a crowded press conference in the afternoon: “Gentlemen of the press, good afternoon. We have called this press conference at a very short notice to brief you on the latest development in the saga of the abducted Chibok Girls.
2.   We can confirm that 21 of the girls were released, safely, to us by 5.30 this Thursday morning and they were flown to Kaduna from the location of their release. This is the most glaring manifestation to date of the unwavering commitment of Mr. President to secure the safe release of the girls and reunite them with their families. It is also a result of the round-the-clock efforts by the Administration to put a closure to the sad issue of the kidnap of the girls.
3.   We expect the released girls to land in Abuja shortly. Ahead of their arrival, we have assembled a team of medical doctors, psychologists, social workers, trauma experts, etc to properly examine the girls, especially because they have been in captivity for so long. They will also be adequately debriefed. We have the list of the 21 girls but we are now contacting their parents as part of the necessary verification exercise. As soon as that is concluded, we will release the names to the public.
4.   Gentlemen, as we have always said, we have been working on the safe release of the girls and following all the leads available. In this instance, the moment we had a credible lead, Mr President gave the green-light to the DSS to pursue it. We can confirm that the DSS pursued the lead in collaboration with a friendly European country and a renowned international humanitarian organization. The DSS was supported by the military.
5.   As soon as the necessary confidence was built on both sides, the parties agreed on the date and the location of the release of the 21 girls. Please note that this is not a swap. It is a release, the product of painstaking negotiations and trust on both sides.
6.   We see this as a credible first step in the eventual release of all the Chibok Girls in captivity. It is also a major step in confidence-building between us as a government and the Boko Haram leadership on the issue of the Chibok Girls.
7.   We want to thank all Nigerians for their support and for never losing confidence in the ability of Mr. President to secure the safe release of our Chibok Girls.
8.   Gentlemen of the press, I thank you all for your kind attention.

NJC’s reaction to raid on judges and DSS accusations